All Tomorrows (2008) is a story written and illustrated by Nemo Ramjet. It tells the journey of the human race over the next billion years, counting from the date man colonized his solar sytem, to the formation of an empire of the descendants of humanity. 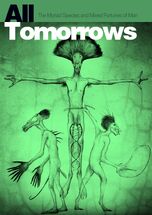 The narration begins with the terraforming and colonization of Mars, due to the ever-growing environmental catastrophes, burgeoning overpopulation of earth and drive of political unification by the entire planet. After several centuries, most of the companies are operating land on Mars, which allowed the Earth to recover. Mars and Earth began a slow and gradual drift that would culminate in Mars asserting its independence from Earth. Earth governments began to thwart the independence of Mars for genetic and policy reasons. The earth, very dependent on the resources of Mars, refused to allow Martian independence; in retaliation Mars boycotts Earth of all but the most vital resources. The civil war that results leads to the death of 8 billion people.

Survivors sought to avoid repeating the catastrophic event that threatened their entire existence, seeking to create a new human subspecies of the two genetically different worlds to better handle the rigors of space and colonization. Despite moral and biological taboos, memories of the war still echoed in the minds of those who remained. In one generation, the new subspecies achieves the results that are hoped for, and over time begin to extend its dominance of the solar system and then among the stars, earning them the name "the Star People". They tried several options to achieve interstellar colonization, one of the most feasible being to send ships full of the genetic material of humanity to a planet, which would be brought to life by semi-sentient machines. Half of the new humans created had an affection for the machines and a disdain for those of their own species, which caused their downfall, however others survived and prospered.

After several centuries, the Star People create the means of communication between the colonies. It was at this point that the galactic empire was at its peak ("The Summer of Man"). During development, they noted that despite having found alien life, none of it was sentient. They see this as a strange phenomenon, which to them painted humans as an oddity or divine creation. Everything takes an unexpected turn when suddenly on a newly colonized planet they found a fossilized dinosaur, which they named Panderavis pandora, which was a land animal endemic to Earth and alien to the rest of the planet's ecology. They take this as a warning about the possible existence of entities far older than humanity, with the capabilities of a Type 2 civilization. Armed with this fact, many human colonies research weapons and arm themselves for the potential conflict to come.

In time, the first contact occurs with an alien species known as the Qu, a race billions of years old, known to be masters of nanotechnology and genetic manipulation. With the ability to control the material world, they assumed a religious, self-imposed mission to remake the universe as they saw fit. In less than a thousand years, every human world was either destroyed, depopulated, or transformed by the invaders. Only a few pockets of resistance were formed which were eventually stifled. During the rule of the Qu, a remnant of the Star Men took refuge in hollowed-out asteroids converted to deep-space generation ships; this would evolve into the faction known as Spacers, eventually adapting to the rigors of zero-gravity.

For 40 million years, the Qu dominated the galaxy leaving behind both massive monuments and modified/devolved humans, then moving on. After they disappear, thousands of genetically modified human species began to evolve and adapt on the planets were they were created. Many of them become extinct either from the Qu's absence or natural disasters, but others survive and evolve millions of years later, into new intelligent species and civilizations.

After millions of years, each civilization makes contact with each other to form a Second Empire of Man, however another human empire was also formed, created by the descendants of the Spacers, called Astromorphs. Unlike the other human species, they had no interest in any of the terrestrial worlds of the Second Empire because they evolved to live in a zero gravity environment.

For 80 million years all civilizations live in the new galactic empire, which was alert against possible invasion to avoid repeating the history of the Star People and the Qu. However, the next threat turns out to be even closer: the Gravital. These beings are thinking machines, descendants of the Ruin Haunters, who had been one of the first intelligent species to recover sentience. Holding the belief that they were the only true heirs of the people of the stars, they regard their offshoot human cousins as inferior. Because their sun was already aging and affecting their homeworld's climate, they had to change themselves in order to survive and so in a few thousand years evolved into machines.

In a couple of millennia the machines exterminated nearly all organic life forms in the galaxy, sparing the Bug Facers as essentially domesticated animals. For over 50 million years the machines ruled the galaxy, until internal problems between different groups because of ideological and religious differences started to appear. Because of this they began to look for a new enemy they could attack in order to maintain the unity of the empire, and unfortunately chose the Astromorphs, which had not come into conflict because they didn't inhabit terrestrial worlds. In only a few million years of war, the Astromorphs defeated the machines.

After the war, the Astromorphs take on the role of gods and begin to re-colonize the galaxy, changing the machine survivors and taking away their ability to control gravity, converting them into new machines, as well as seeding worlds with offshoots of the Bug Facers. During reconstruction, the Astromorphs created their own versions adapted to the gravity of the planets as a way to monitor the new rule, known as Terrestrials. During this early period, they make ​​contact with an alien race called the Amphicephalus, characterized by giant snake heads at both ends, one of which carried a secondary retractable body used to interact with the environment.

The achievements and events that occurred after contact are described, including the unification of galaxies, the reunion and submission of Qu, and the construction of large artifacts. One of the most significant events is the rediscovery of the earth over 560 million years after the last man had walked on it.

At the end of the book, the author reveals that ultimately humanity is extinct and speculates on the possible causes of that event, and gives a review on the fate of man, with a philosophical afterword.

Retrieved from "https://speculativeevolution.fandom.com/wiki/All_Tomorrows?oldid=71497"
Community content is available under CC-BY-SA unless otherwise noted.