With 34 species, Australia possesses over half of the world's remaining alvarezsaurs (popularly called "Alvies"). This bizarre group of theropods reached its evolutionary zenith during the early Cenozoic, but subsequently vanished from many parts of the world, perhaps through competition with ground-running true birds. Most extant species are small, cryptic forest and woodland animals. Larger forms can only be found in Australia and New Guinea. 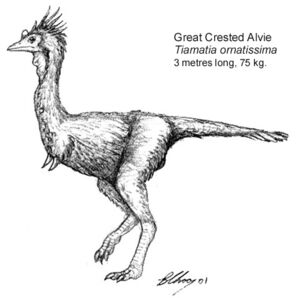 The neoalvarezsaurids actually labor under a misleading name, as they are, anatomically, the more conservative of the two alvarezsaur sub-clades. These creatures are long-legged, long-necked creatures superficially similar to the ratites of Home-Earth and the ornithomimosaurs of the past. 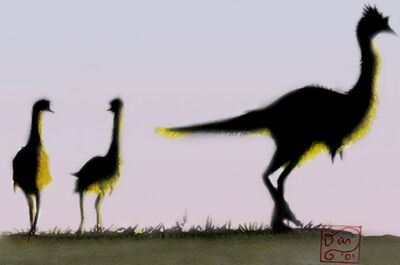 An extremely robust and bad-tempered alvaresaur species of lowland rainforests of Australia. Single animals aggressively defend a large territory through which it wanders in search of fallen fruit, insects and small vertebrates on the forest floor. 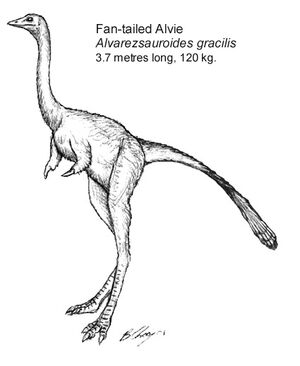 The largest living alvarezsaur is an inhabitant of the open and semiarid bushland throughout inland Australia. A nomadic species, it feeds on a wide range of grasses, leaves, seeds and insects. Able to sprint at over 90 km/h, it is one of the fastest-running of all land animals. The large rectrices (possessed by both sexes) can be spread out into a large, spectacular fan during mating-dances.

The largest New Guinea alvarezsaur, the Papuan muppet (Marionia stulta) is a broadly crepuscular montane omnivore. It lives in small family groups ( 'hensons' ) high in the mountains of the island, dwelling at the edges of the forests and venturing out onto the small patches of grassland at dawn and dusk. In this way, the muppet avoids its chief predator, the Papuan eagle, which is most active in full daylight after the fog lifts.

Muppets breed in fallen trees and in thick undergrowth. Clutches usually consist of two eggs, and the young mature quickly, fed by their parents and older siblings.

M. stulta exists in many different colourforms - the wattles under the jaw and the feathers along the sides and back of the head can be quite strikingly pigmented - but genetic evidence suggests they are all still closely related, despite the geographical difficulty presented in traveling from valley to valley. Comprising 80 percent of alvarezsaur species, Gallionichidae is easily the more successful of the two alvarezsaur sub-clades. Rarely more than a meter long (although one species, the giant blood-tail of New Zealand, may grow to a length of two meters) these little animals hunt for invertebrates and small mammals and reptiles along the ground. Some species show herbivorous tendencies. 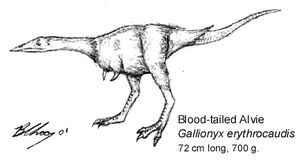 The most specious genus of alvarezsaurs are the diminutive "Rat-tailed Alvies", so named because of their featherless, scaly tails (a trait shared in the closely related genus, Sylva). The Blood-tailed Alvie is to be found in moist forests and woodlands throughout southern mainland-Australia. A secretive, solitary animal, it feeds during the day, using it's bill to probe in soil and leaf litter for small animals.