Proposed mitochondrial divergence times of living deinonychosaur lineages superimposed against the first appearance in the Cenozoic fossil record (denoted by a claw icon). Proposed relationships in this study were based purely on biochemical criteria. Perhaps the most famous of all carnivorous dinosaurs (with the possible contenders being the tyrannosauroids and sauropods) deinonychosaurs, those of the 'terrible claws', has been a common and successful tribe of carnivores since the early Cretaceous. Creatures like Deinonychus and Velociraptor hunted the ancient world, and most modern-day deinonychosaurs have changed little since then.

With the exception of the tree-climbing abronychosauroids, Spec's deinonychosaurs all follow the body plan laid out by their ancestors. They are bipedal, with long necks and arms relative to the body. The tail is also long, and stiffening tendons turn is into an inflexible pole that the animal uses for balance while running. The pubis (hip) is swept-back in the manner of a bird, and the head and hands are also birdlike. Indeed, these land-bound predators may be the descendants of early fliers, who gave up their wings over 100 million years ago.

All of these adaptations for speed and maneuverability aside, a deinonychosaur's chief claim to fame are its claws; their hands are armed with three long, curving talons and each foot bears an additional 'sickle claw' on the inner toe. These toes are hyper-extendable, jointed so that they draw the claws away from the ground and thus avoid blunting the talons' tips as they walk. The whole arrangement is similar to that of an RL cat, whose retractable claws may be extended to tear or hold prey. Most deinonychosaurs are similar to cats in their hunting style, preferring to stalk and ambush prey rather than pursue it over long distances.

In our home time-line, deinonychosaurs died out, along with all other non-avian dinosaurs, at the end of the Cretaceous period. In Spec, of course, they survived, and seem to have carried on with little change into the Eocene. At his point, when environmental shifts were killing off many large predators around the globe, the adaptable deinonychosaurs quickly diversified to fill the vacant niches. Fossils from this time are frustrating vague, but from this confusion emerge the four great groups of modern deinonychosaurs.

The following is a series of notes from an unpublished article that documents the evolution of the Deinonychosaurs in Spec. See the following evolutionary tree as seen above.

Only distantly related to the other deinonychosaurs, arbronychosaurs trace their ancestry back to basal deinonychosauria and the beginning of the Cretaceous. Their precise origins are unknown, and arbronychosaurs first appear in the Eocene with Arbroraptor mongoliensis, which is very similar to modern species. In most respects, these dinosaurs resemble their terrestrial forebears, but their hands and feet are heavily modified for grasping. Many species are now so heavily adapted to living in trees that they are almost immobile on the ground.

Mattiraptors are an an "old-world" radiation of small African-derived deinonychosaurs, possibly related to the American hesperonychids. Until recently, they were considered to be late surviving troodontids based on strong convergent similarities, but most scholars now label them as aberrant deinonychosaurs.

Hesperonychidae is the result of an early Laurasian deinonychosaur radiation that has since dwindled down to a handful of New World genera during the Neogene. These predators are found in central and eastern North America, as well as South and Central America, where some species attained huge sizes.

The most common of the deinonychosaurs (with mattiraptors a close second), the draks are the unquestioned lords of virtually all medium-sized predator niches in Africa, Eurasia, and North America. Little different from their Cretaceous forebears, draks are often heavily-plumed and many bear the large teeth and relatively small sickle-claws that have lead some scholars to link them to Dromaeosaurus. However, other drak species lack these features, which may be convergent with this ancient predator.

Although most modern deinonychosaurs are easily classifiable as belonging to one of the four major taxa, a few species stubbornly resist any efforts to group them with other living species.

The 1.7 meter long ibisbill raptor is a rare, little known species found in stony, upland river valleys of the Himalayan mountains. It takes its name from the distinctive down-curved bill that superficially resembles that of the ibis. All of the teeth in its premaxillary and frontal dentary bones have been lost; however the teeth further back in the jaw form long "spikes" that allow it to hold on to slippery fish. This species possesses the enlarged inner toes of the deinonychosaurs and troodonts, however the animal uses these claws only for defensive purposes.The ibisbill's haunting, if somewhat embarrassing call (a Shaggy-esque "ZOICKS!!!") can often be heard in the remote montane regions where it dwells. It uses its bill to probe among stones of riverbeds and rake gravel for small animals.

Though originally thought to be a "one-hit wonder" of a clade, a number of closely-related species have been reported in upland areas ranging from Asia Minor to Vietnam. They have yet to be formally described, but field observations suggest that aside from differences in plumage they are highly similar, and likely all cogeneric.

For instance, the ninjas are too poorly-studied to classify exactly, based, as they are, upon little more evidence than some eye-witness reports, photographs, and a handful of feathers. Basic morphology suggests that these secretive predators are draks, but it has been suggested that ninjas are actually oversize arbronychosaurs, while preliminary reports concerning the only closely-studied ninja specimen (later lost due to inclement weather), while others place the genus in Mattiraptoroidea based upon manual physiology. Analysis of the feathers from this specimen, while confirming that Tacitosicarus is, in fact, a deinonychosaur, shed no light on the issue.

The ninja (Tacitosicarius ater) is one of the more facinating - and sinister - animals in the history of spexploration. This Indonesian deinonychosaur was virtually unknown until an expedition was sent to find the Dwarf undaur (Brachioceratops minimus), another cryptid at the time. Two members of the expedition, Drs. Mark Shitashi and Robert Berliner became separated from the others in their hunting party. Only Dr. Berliner was found days later, starved, dehydrated and delirious. He managed to tell the others what had happened before passing out:

"We had been following some tracks when Mark said he'd seen something [...] He pointed it out for me when I gave him the camera. It looked like a big drak sitting in a tree, except it was almost completely black, with sort of orangey skin around the eyes and a belt [...] [it] reminded me of a ninja, sort of [...] Then Mark moved closer to get a better shot, and the ninja just flipped out! It jumped down [...] spreading its arms and sort of just flew and disappeared [...] Then it was all over [Mark]! I've never seen anything move that fast that silently [...] It just ripped [Mark's] head right off! Then it screamed like a wailing guitar, and I thought 'crap, I'm, done for,' but then [the ninja] just looked at me backed away [...] left me like it didn't give a damn. "

Once Berliner had fully recovered, he asked that this account would not be given into the public, but somehow it leaked out, and the cryptid deinonychosaur was soon jokingly named "the ninja". An earlier expedition to Borneo had found deinonychosaur footprints, which lent some credibility to Berliner's "report". Further expeditions were sent to find and study the mysterious black deinonychosaur, but except for a few footprint casts and blurry photographs, nothing substantial could be brought back. A ninja was, however, sighted - though only briefly, by all but the first expedition. The animal encountered by Shitashi and Berliner had originally been interpreted as a probable melanistic mutant, but eventually it became apparent that all the ninjas encountered had a nearly black plumage. Eyewitnesses often reported that the animal was apparently resting on a low branch and escaped swiftly but silently after it had noticed them.

The last expedition managed to finally gun down a ninja that had attacked them for no apparent reason. The animal was photographed, measured and prepared for taking back for further study, but the expedition run into bad luck due to a sudden change in weather, and except for a couple of arm feathers, the remains of the ninja were lost. We do, however, now know more about the anatomy of the ninja than ever before thanks to this expedition.

Ninjas grow to (at least) 3 meters in length, more than half of that being tail. They have unusually long arm feathers which may be used to aid in jumping (likely down from trees rather than from tree to tree). Both fore- and hind limbs show some adaptations for climbing, including unusually flexible joints in the inner toes. The sickle claw is relatively small. The ninja skull lacks preorbital horns typical to Boreonychidae, and the skin around the orbit is bare.

The classification of ninjas remains unknown to this day. They have certain characters in common with boreonychids, hesperonychids, mattiraptorids, and even arbonychosaurs. All we can say for certain is that they're not mammals.

A species based upon a single role of film taken by an automatic camera, the white ninja is just one step up from pure myth. While the photos prove these deinonychosaurs' actual existence, they do not constitute a type specimen to be studied and classified. White ninjas may be related to the only slightly better-known ninjas of Borneo (it has been suggested that the animal caught on film was an albino), or they may belong to another branch of Deinonychosauria entirely.

The white ninja (possibly of the genus Tacitosicarus) was discovered a decade after the expedition that first encountered the ninja in Borneo. There had been some reports of a white long-tailed bipedal animal living in the Himalayas, but no one had gotten near enough to the beast for it to be properly identified. Photographs were taken by an automated camera finally revealed the identity of this elusive deinonychosaur. Its outward similarity and cryptid status gained it the name "white ninja", which based on photographic evidence may in fact be quite appropriate.

More tangible evidence is however still required to determine the relationship of these two mysterious deinonychosaurs, but still other deinonychosaur species fail to submit to classification, even though they have been studied extensively. As expected for the sole survivor of an endemic Gondwanan deinonychosaur lineage with a fossil record stretching back to the Cretaceous, genetic studies show that genus Austroraptor (one South American and one North American species) shares a very distant kinship with the other sickle-claws. Alas, those same studies shed little light on the weird Himalayan Ibidoraptor which proved to be even more genetically dissimilar from the main branch of deinonychosaur evolution than Austroraptor. 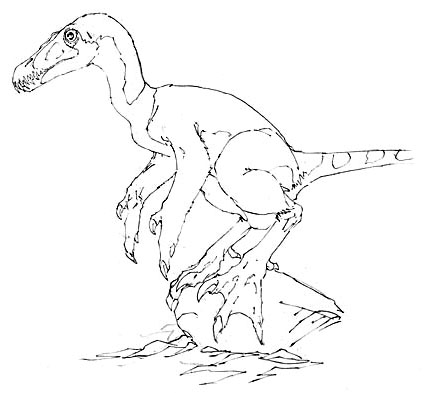 Classifiction of the torrent raptors is hampered by the fact that they are derived from a branch of Deinonychosauria far removed from any living group and isolated for 50 million years, and by their adaptation to a unique lifestyle. They are aquatic predators.

The 70-centimeter torrent raptor is an aberrant maniraptoran associated with fast flowing mountain streams along the length of the Andes. It is a strong swimmer with stiff, hydrodynamic feathers along the arms and large webbed feet. Sharp claws and a reversed hallux allow it to cling to slippery rocks.

Torrent raptors (Mergaraptor enigmaticus) forage in the water for fish and insect larvae, trapping them with needle-like teeth. They also eat the eggs and ducklings of stream dwelling waterfowl.

The torrent raptor is not closely related to other local deinonychosaurs, which are recently derived from North American stock. It appears to be the last surviving "old-endemic" South American raptor, directly descended from Late Cretaceous Gondwanan stock. The pelvis closely resembles that of Unenlagia whilst the ulna is surprisingly "old-fashioned", reminiscent to that of Megaraptor. 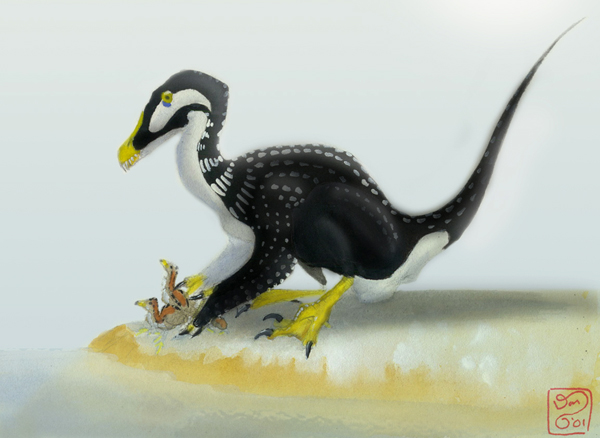 Retrieved from "https://speculativeevolution.fandom.com/wiki/Spec_Dinosauria:_Deinonychosauria?oldid=72615"
Community content is available under CC-BY-SA unless otherwise noted.