Speculative Evolution Wiki
Register
Don't have an account?
Sign In
Advertisement
in: The Future is Wild, Future Biology, Documentaries

The Future is Wild

Not to be confused with the category.

The Future is Wild was a 2003 "documentary", which used computer-generated imagery to show what life might look like in the future after millions of years of evolution. This series was accompanied by a book written by geologist and author Dougal Dixon and television producer John Adams.

The basic concept of this show is similar to the concept of After Man; humans have become extinct and other animal species reconquer the world on nature's behalf. The Discovery Channel made the scenario less harsh by stating that the human race had left the planet instead of disappearing completely. Our descendants would then send probes back to Earth to observe how life has changed. Many other animals and plants also disappear, especially well-known mammals, such as cats, dogs, whales, elephants, rhinos, dolphins, bears, seals, hippos and apes.

This documentary was based on research and interviews with dozens of scientists, though some conclusions these scientists made are controversial, with other scientists criticizing many conclusions made in the series.

About 5 million years hence, the world is in the grip of an ice age. Most of the world's freshwater is locked up in the ice caps and glaciers. The animals who live on the borders of the ice have to adapt to the harsh temperatures and unforgiving winters. The tropical rainforests of this future earth have mostly been replaced by tracts of savanna and grassland, devastating such diverse ecosystems as the Amazon basin. The Mediterranean has dried up as Africa moves slowly north towards Europe, which is mostly covered in ice and tundra. The East African Rift has split off from the mainland to form its own landmass just as Madagascar did eighty five millions of years prior to it. Australia has moved north and collided with New Guinea and parts of Indonesia, pushing them northwestwards and causing them to fuse into Southeast Asia.

During this time of cold temperatures, the central region of the North American continent has become a vast desert. It is just as cold as the Gobi Desert was and is frequently battered by fierce sandstorms. The desert also receives snowfall in higher areas and encounters tornadoes. The few plants that live in this desolate region are hardy and adaptable. The inhabitants of this region, including the armored Rattlebacks, also have to be wary of huge diurnal bats.

Deathgleaner, a giant predatory bat of the North American desert

Spink, a subterranean quail that lives in underground colonies

Once a great sea, the Mediterranean has become a large salt basin. The area is about 6,500 feet or 2,000 meters below sea level. It consists of brine lakes and salt flats that turn into salty mush in the rare event that it rains. The islands of the Mediterranean now dot the landscape as mountains. Due to high salinity, only bacteria and algae survive in the Mediterranean lakes. Brine flies have been able to flourish here as well.

Cryptile, an agamid lizard that catches flies with its frill

Gryken, a terrestrial mustelid that is descended from the pine marten

Scrofa, a Mediterranean descendant of the wild boar

The Amazon basin was the most biodiverse region in the world, but now it has been mostly reduced to stretches of savanna. The area now receives very little rainfall, causing the Amazon river to dwindle. Bushfires are common, ignited by lightning or sunlight. The Amazon is now home to the last species of primate on Earth, the Babookari.

Babookari, a ground-dwelling descendant of the uakari

Northwest Europe is frequented by severe blizzards. Ice sheets cover most of North America, all of Scandinavia, and almost all of Europe. Sea levels have dropped approximately 500 feet (150 meters). A great deal of the land just south of the ice is covered in barren tundra. Temperatures drop to -70 degrees Celsius. Very few plants and barely any trees grow from the shallow soil.

Gannetwhale, a flightless aquatic bird descended from the gannet

Shagrat, a sheep-sized marmot that lives in herds on the tundra

One hundred million years from now exists a world the polar opposite of ninety five million years ago. Instead of dominating glaciers and dry savannah, the world is rich, moist, and damp. Rainforests cover most of the land and vast swamps border the coast. The sea level has risen 100 meters causing new reefs to form. Mammals are virtually on the point of extinction and the Earth is dominated by animals who arose from the new conditions, such as reptiles, birds, fishes, arthropods and mollusks. Due to continental drift mountain ranges are taller than ever. But there is a dark side to this paradise world. Increased volcanic activity has caused a large mass extinction to occur. Most lifeforms won't survive, but a few life forms will rise up and claim the earth for their own.

When Australia colides with Northern Asia and North America a large mountain Range forms. Three times as high as the Himalayan mountains, it is one of the few places in this hothouse world that has snow and ice. The summers are faintly warm and the winters are bitterly cold. Blizzards are common year round. The area also has a large amount of ultraviolet light. 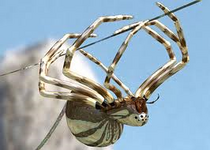 Poggle, the last mammal on earth, descended from a hamster

Rise in sea levels has triggered massive floodings of land to occur. 100 million years later, the country of Bengal, India, has transformed into a large wetland seven times the size of the Everglades. The swamp consists of estuaries and tree groves. The humidity levels are at 43% and have caused the Himalayas to erode to small hills.

Swampus, an octopus that can survive on land for periods of time

Toraton, a gigantic tortoise that lives in wetlands

Lurkfish, an electric fish that hunts in murky water

100 million years from now, Antarctica has drifted north to the equator and is now covered in rich forest twice the size of the Amazon. Rain falls frequently and sunny days are occasional. Most of the species of plant have evolved from the mosses, lichens and algae that inhabited Antarctica in the human era but some seeds and spores have drifted from South America. Most of the forest's inhabitants are birds evolved from seagoing fowl. A few bugs and spiders have drifted over from other continents and nearby islands.

Roachcutter, a swift descendant of the tube-nosed birds

Spitfire bird, a small bird that can spit a corrosive liquid

Spitfire beetle, a beetle that works in groups to catch birds

The melting ice caps has caused sea levels to rise over 100 meters, flooding flat land and warming up the ocean. As a result, large reefs, bigger than the Great Barrier Reef, have formed. But there are many differences then from the reefs of today. For one thing, there is no coral. Instead, large algae reefs have formed. The area is also dominated by tropical storms.

Ocean phantom, a large colonial jellyfish that travels with the wind

Reef glider, a free-swimming descendant of the sea slug group

Spindletrooper, a sea spider that defends ocean phantoms from predators

The Earth is recovering from the mass extinction that occurred 100 million years ago, causing the death of most evolutionary groups, leaving only molluscs, insects, slime molds, plants, and the remaining fish and crustaceans to fill the evacuated environmental niches. All the continents have met up and created a second Pangaea and a large global ocean. A massive desert has formed in the center of the continent and forests border the coastlines. Many of the lowly organisms have adapted and have claimed the open niches - molluscs have taken the place of mammals, for instance. The last backboned animals, fish, now fly as the birds or remain in the seas as the last sharks. Crustaceans and some molluscs also stay in the oceans, whilst insects and worms populate the central deserts.

The central desert lies in the very center of the continent, where there is no rainfall. This is because of the large mountains that border the coastline and block the oceanic moisture from reaching the desert. There is no vegetation. The only water that the desert has is at the underground rivers and the occasional oasis formed by the emergence of part of the cave system. Sandstorms are common as well as tornadoes. Specialized insects and worms are the only creatures to make a living here.

Terabyte, a species of termite with extremely specialized castes

Garden worm, a worm that has formed a mutual relationship with algae

On the east coast of the supercontinent, there is an 8,000 (49,709.695 miles) area called the Rainshadow Desert. This is where ocean flish land if they are caught in continues storms called hypercanes with 250 mph (400 kph) winds. Animals and plants here have adapted to very little moisture and infrequent food intake. It is populated by molluscs and insects as well as carnivorous plants.

Bumblebeetle, a species of beetle that depends on dead flish for survival

Desert hopper, a strange snail that uses its "foot" to hop

Deathbottle, a carnivorous plant that traps prey with poisonous spikes

On the northwestern corner of Pangaea II, warm currents bring large moisture levels and results in endless amounts of rain. Because of the plentiful supply of water, a large, temperate rainforest has formed. The plants and animals of the northern forest are used to the constant moisture of rain. Because of this, once lowly organisms, such as slime molds, can now evolve into new species. Conifers are now able to grow the size of Redwood trees, and the once dwindling lichen plant is now a three-meter high tree which bears fruit. Though covering a relatively small range, this forest is one of the most complex of ecosystems on land. This forest is the home of a new, advanced animal order: the Terrasquids, land-dwelling cephalopods descended from present-day squid. This forest could also be the birth place of a new civilization as one of the most favourable places on Earth for the development of particularly high intelligence. Some fish who have taken flight have entered the forest and abandoned oceanic life, becoming forest flish, the fliers of this new habitat.

Megasquid, an omnivorous terrestrial squid that reaches sizes similar to that of the elephant, others disagree that this animal could exist [1]

Forest flish, a species of flish that lives in the forest

Lichen tree, a large tree in a symbiotic relationship with the Silthersucker

With one continent, the New Pangea, only occupying most of one half of the planet, the rest of Earth is covered by a vast global sea. Because there are no landmasses to break up currents in the ocean, extremely powerful and large "hypercanes" batter the coastlines almost year round. The currents of the ocean are extreme from pole to pole, which is why most of the bony fish have left the water and evolved into ocean flish and the rainbow squid are extremely large, but not particularly powerful, for the currents can take them all over the planet without requiring much strength on the part of the squid. Other inhabitants include the silverswimmers, who have taken the niches left by fish wiped out by the mass extinction and the sharkopaths, future sharks, which are the last fish left in the seas.

Rainbow squid, a massive squid that changes colors for camouflage and display

Sharkopath, a bioluminescent species of shark that hunts in cooperative packs

In order to ensure that The Future is Wild had a scientific basis, the production team acquired the aide of 16 scientists. The scientists were of a variety of different fields including paleontology, botany, biomechanics, and climatology.

In 2007 a animated series television series, aimed at children, was produced.

In the moment, a VR game, appears to be under work by CGartist continuing the exploration of new periods of time, environments and creatures.